Another red and gold come together to create a traditional money envelope, that is given to young children by their parents and grand parents for the Lunar New Year celebration.

This project was inspired by an innocent visit to the local post office. I needed to pick up a parcel from there and I was entering the office with a heavy head - I was trying to put my thoughts in order, straighten them out. It was a chaos in my head - all these ideas popping out like snowdrops in early spring. Some organizational chart was required. I had the idea of making a money envelope and I knew I wanted it to have something to do with the symbol of 2017 Lunar Year - the rooster. At first, I was thinking that the spelling of the word would seem nice, embroidered on the red batik, with gold embroidery floss. Oh, no!... after checking the right spelling of the symbol, I was discouraged unconditionally - of all twelve of them, the rooster symbol is probably the most complicated. Have you ever tried to wright an hieroglyph? One line made a bit longer than needed or misplaced, changes the meaning of the word. I wouldn't dear, no. I may easily make a full of myself. I glanced at the desk in the post office, patiently waiting for the lady to take my parcel out of the storage and check my credentials, and right there, underneath the spotlessly clean glass were these amazingly bright red stamps with the crisp graphic gold image of a rooster, honouring the Lunar New Year! I wanted to dance at that time - it was such a joyful moment!

The rest was easy. I had the model and it was perfect for my project. In its simplicity, it shapes a perfect rooster head. I have to admit two things: 1. I only saw the stamp with the head at the post office. The one with the proud rooster in its full size I found in the web later at home, after I had already done my envelope. 2. I could not find any information about who the designer of the stamp was, that is why, I can not mention it here in my post. But I will take the time to show you the stamp from the past Year of the Rooster. And I will do that just because I loved it so much: 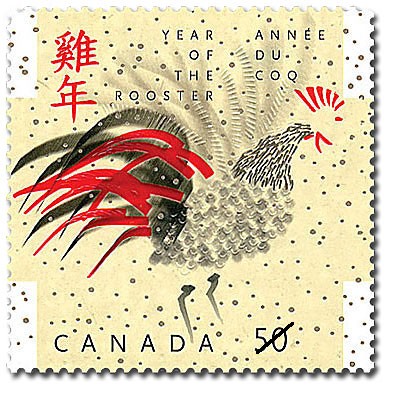 This stamp was created for 2005 by the designer Hélène L'Heureux. The interesting thing about this stamp are the brush strokes she used while creating this proud bird, tributing the ancient eastern art of paint brushing.
"As a designer, I try above all to be honest," says Hélène L'Heureux of Montreal's Gottschalk+Ash International. "It would be a fallacy for me to attempt Chinese brushwork - I could not pretend to create something in an art form that takes decades to master. I wanted to create a design that would re-interpret the genre in a personal and playful way."

Back to my bird...I have another confession to make. To fully follow the eastern traditions, I should have stitched my rooster exactly the way it is on the stamp - facing east, greeting the rising sun... I have no idea why I flipped it - I just felt that looking left, it creates more personal message. 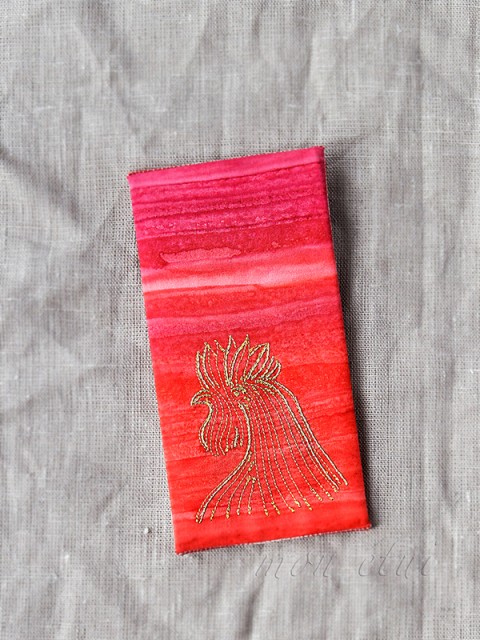 Thank you for visiting my corner.

I am a true believer in already clichéd, overused thought "The Beauty will save the world" and try to find it everywhere - in a meaningful word, in a silent sigh, in the rising sun, in a blooming flower, in a singing bird, in a warm touch, in a golden star, in angry wind, in a drop of pouring rain, in a shared piece of chocolate,  in sadness and in happiness, in disappointment and in gracefulness. I keep my eyes open and all my senses scan constantly the world for inspirations. And they are everywhere. But the most inspiring of all is the Beauty.

A Letter to Santa

No comments made yet. Be the first to submit a comment

The stories from the past

This email address is being protected from spambots. You need JavaScript enabled to view it.